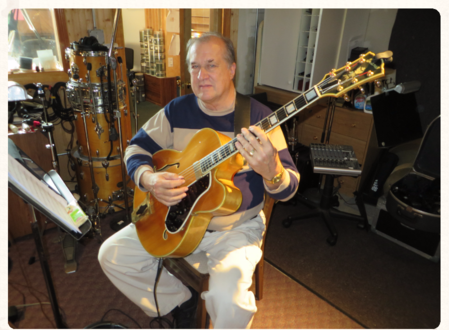 After spending the last 20 years in the Boston Area, I recently returned to my hometown of Philadelphia. It's been a pleasure to reconnect with the Philly music scene! I've recently had the opportunity to perform and record with old friends and new-all of whom are incredibly talented and supportive in a way unique to this area!

We recorded the CD directly to tape at RADScape Studios owned by Randy Weaver.  Now I'm a believer—tape definitely provides a true and “warmer” sound-especially if the session is recorded by an artist of Randy's caliber.

I also just completed the 4th CD with a former student and consummate guitarist Stu Goodis (Goodis and Glenn) entitled “New Song”. This is comprised of 12 original Jazz Guitar Duets that range from Latin to straight ahead and even blues shuffle styles.  Please visit the Goodis and Glenn page on this site for more information.

Since retiring from Roland Corporation as New England District Sales Manager, I have returned to devoting all of my time to performing, composing and producing music.

I am continuing to reach out to old and new musical friends in the Philly area while maintaining bonds with my New England associates-particularly on Cape Cod.

I've been invited to perform a CD Release Concert for the JAZZ BRIDGE Organization in January. This is a magnificent group that helps to support Jazz musicians in need headed by Suzanne Cloud and Wendy Simon. Please check out their website.

It's also great to be back in Pat Martino's town! He has inspired me for as long as I've attempted to master my instrument!

Onward and Upward!!! I thank our Higher Spirit for sharing a little bit of the Creative Light that keeps us searching for the TRUTH!

I am also eternally grateful to my wife Kathy Anderson Glenn for her unending support and inspiration.

Tom performed on stage with such notables as Chuck Berry, Major Harris, Sammy Davis Jr., Nancy Wilson, Alice Cooper, Captain & Tenille, the Delphonics and many others over a period of more than 30 years.

Tom composed more than 20 scores for New Jersey Public Television Films for the “New Jersey Outdoors” series and “You, Me and Technology” series.

In 1987, Tom received an Emmy Award from the National Academy of Television Arts & Sciences for composing “The Technology Spiral” for “You, Me and Technology” for New Jersey Public Television Films.

He composed and recorded popular songs, which were released on Columbia Records, TEC Records, Streetwave Records and other labels. He collaborated on 4 Guitar Duet CD’s with Stu Goodis (former student), and has recently released an original feature album with rhythm section and brass entitled “Shuffle Time”.

He received a Billboard Award for “All That I Am.”